The 2019 Vancouver Fringe Festival just concluded but that doesn’t mean it ends there because the pick of the Fringe has just been announced!

This year’s picks got people talking in lineups, at the Phillips Fringe Bar, and online, receiving rave reviews that they just have to bring them back for another performance!

Traveling the hilarious, rocky road from denial to grudging acceptance of getting older, Old-ish is about aging and death only way funnier!

“She refuses to be grim while waiting for the grim reaper … The show is full of laugh-out-loud moments.” —JoLedingham.ca

Growing up in a dysfunctional family in Japan, Kazu Kusano found humour as a survival tool, but a girl being funny is a problem.

“Kusano’s comedy is as biting as it is refreshing … Pretty Beast signals a bold and important new voice in comedy and theatre.” —the Georgia Straight 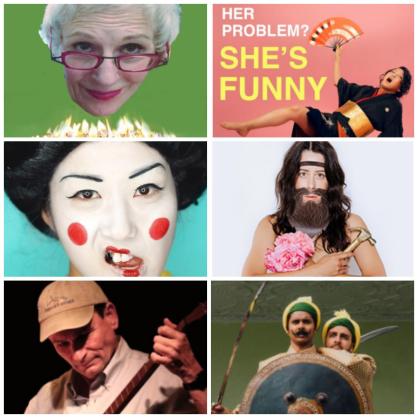 My Name is SUMIKO
Saturday, September 21 at 7:00pm

“Fukumura brings so much charm, energy, and over the top silliness to her performance.” —ILiveInEastVan.com

Meet Larry. He’ll be the first to tell you that he’s handier than a pocket on the back of a shirt. Larry wants to prove he’s worthy of a good woman, that he can quit drinking, and even take up meditation. Larry’s journey into his own psyche uncovers more than he expected.

“This is a daring, weird, hilarious show with headbanging, so basically everything you could want from the Fringe.” —the Georgia Straight

Tomatoes Tried to Kill Me But Banjos Saved My Life
Sunday, September 22 at 6:00pm

“Funny, beautiful, and deeply affecting. This is an important story to remind us that life is short and pursuing your passion(s) can save your life.” —Vancouver Presents

Adele Noronha and Andeep Kalirai star in Rajiv Joseph’s story of Imperial Guards at the Taj Mahal during one of the cruelest acts in (perhaps fabricated) history.

“Bet you haven’t see a show quite like this before … Adele Noronha shines.” —Colin Thomas’s Fresh Sheet

Aside from the Pick of the Fringe, the Pick Plus are Fringe hits that are so good they brought them back from Fringe’s past or from other Fringe Fests!

Rocko and Nakota: Tales from the Land
Wednesday, September 18 at 7:00pm

Nakota is trying to write the greatest story ever. When Grandpa Rocko comes to visit him in hospital, Nakota gets whisked away into a world of stories—right below his feet.

“An hour of warm and unpretentious storytelling … Recommended for older kids and adults.” —the Georgia Straight

A fish out of water making sound waves faces off with cosmic flute rock show-stopping solos in the story of a merch girl/PhD student.

“I guarantee you with every fibre of my body that Flute Loops is an incredible show.” —Mooney on Theatre

The Ballad of Frank Allen
Thursday, September 19 at 8:45pm

When a scientific accident causes a mild-mannered janitor to shrink and get stuck in another man’s beard, their unlikely friendship might be exactly what they both need.

“Basically a bizarro take on The Odd Couple, this fast-paced hour of physical and metaphysical comedy is time well spent.” —Winnipeg Free Press

All Pick and Pick Plus shows will be presented at Performance Works, located at 1218 Cartwright Street on Granville Island September 18-22. Tickets are $25 each and are available at vancouverfringe.com.

Partial proceeds from Pick and Pick Plus shows go to support the Vancouver Fringe Festival and tickets are on sale now!