The 2016 Vancouver Fringe Festival is just around the corner and new works and event announcements have started trickling in. This year, the Fringe partners with Ruby Slippers Theatre and Equity in Theatre in presenting dramatic reading of  5 new plays by female-identifying playwrights, the 2016 Advance Theatre: New Works by Women. 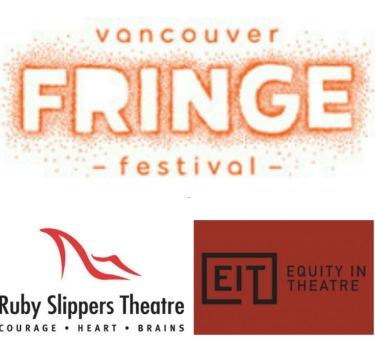 Aiming to Float by Janet Hinton, directed by Laura McLean.
Monday, September 12 at 1:30pm
At a pain clinic, a new and uncooperative patient clashes with her exercise therapist. Faced with crises of physical and emotional pain, together they discover the possibility of love.

zahgidiwin/love by Frances Koncan, directed by Christine Quintana.
Tuesday, September 13 at 1:30pm
A dark, decolonial comedy set against the backdrop of colonial Canada, zahgidiwin/love is a postcolonial fantasy about intergenerational trauma, cultural genocide, truth and reconciliation, and rock’n’roll.

The Long Call by Jenn Griffin, directed by Heidi Taylor.
Wednesday, September 14 at 1:30pm
Holly, an ex-exotic dancer, is close to fulfilling her life’s dream of freeing captive orangutans into the wild when her long estranged ex-boyfriend, Jack, shows up to settle an ancient score.  The Long Call is a darkly funny, multimedia piece inspired by shadow puppetry, philosophy, and high stakes poker.

Anywhere but Here by Carmen Aguirre, directed by Anita Rochon.
Thursday, September 15 at 1:30pm
A darkly comic, magic realist play that centres around the quest for home.  A family of four Chilean refugees drive a mint condition, hot pink 1950s convertible through the Arizona desert, en route to Chile, which according to the father, is paradise.

Women of Papiyek by Quelemia Sparrow, directed by Kim Harvey.
Friday, September 16 at 1:30pm
Generations of European and Indigenous mixed race families lived in Papiyek (now called Brockton Point in Stanley Park) before being evicted from their homes and forced to re-locate.  This is the story of three Indigenous women who lived in Papiyek at the turn of the 20th century.

The dramatic  readings of the selected shows will be presented as weekday matinees at the False Creek Gym,  1318 Cartwright Street on Granville Island during the Vancouver Fringe Festival which runs from September 08-18 2016. Tickets for events and shows will be available in early August.