If you’re like me and musicals are your thing, here are my top – not necessarily in order – picks for this year’s Vancouver Fringe Festival!

The O.C.: The Musical

An unauthorized parody of the hit teen drama FOX series. It follows the life of Ryan Atwood, a troubled 16-year-old bad boy who is abandoned by his parents but is given a second chance by his attorney, Sandy Cohen. Ryan bonds quickly with Sandy’s nerdy son, Seth, and they quickly get caught in a storm of musical teen drama.

TITUS: The Light and Delightful Musical Comedy of Titus Andronicus

Made you look! Now imagine it all set to music.

Shakespeare’s grizzliest play renewed into the giddiest musical, exploring why violence is so darn entertaining. Appalled? Offended? But you know you want to see it. So tap and sing along to TITUS— more than a parody, more than an adaptation —it’s a bloody grand time.

TITUS is a dark struggle for power and revenge —but why slit a throat when you can sing and dance, right? 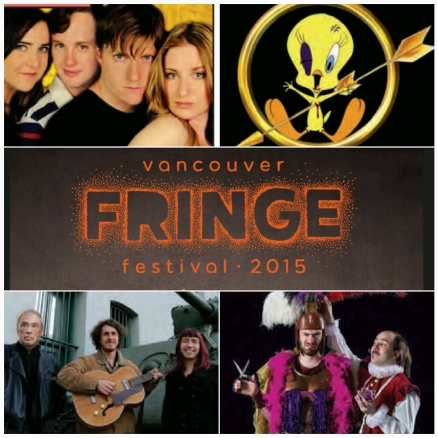 District 13 Productions at the Pacific Theater

A priceless pop culture parody of Suzanne Collin’s hit novel and its inevitable film. Watch as Katniss Everdeen takes a stand against the Capitol, while belting out twisted Taylor Swift, Maroon 5, and Lorde tunes (to name a few). Experience a ridiculous ride through teenage angst.

It’s all the fun of a dystopian death match, now with kicky pop tunes!

Just Watch Me: A Trudeau Musical

Amleth Productions at the Pacific Theater

Based on a true story of a B.C. teacher fired for speaking out in 1970.

High school student May Lee is sent back in time to research her history paper on the 1970 October Crisis. The FLQ has kidnapped a British diplomat and a Quebec Cabinet Minister, so Prime Minister Pierre Trudeau imposes the War Measures Act for the first time in peacetime.

May meets a singing Trudeau at his famous “Just Watch Me” press conference. High school students include Carlos (gang leader), Gabriel (Quebecer who falls for May), and Raj (songwriter and field hockey star).

What happens when a local Vancouver hero from the 1800s weighs in on a discussion of his life with two women nearly a century after his death? LOCO+HERO+JOE is a new musical inspired by the life of legendary Vancouver lifeguard, Joe Fortes.

Local Vancouver artist, Darcy McFadden, has crafted a new musical and enlists a troupe of local artists to bring Joe back to English Bay for the Fringe!

Hailed as “impossible to resist” by the Montreal Gazette, these performers leave you smiling, humming, and wanting more. Two real-life sisters play everything from tubas to ukuleles, guitars, and accordions to bring a topsy-turvy world to life. This odyssey follows a pair of lovable detectives as they ride the rails to crack their biggest case ever.

Chase Padgett (6 Guitars) returns as a manager, a mother, a mentor, and a guitar prodigy who all share their side of what really happened to the best damn guitar player you’ve never heard of… the Nashville Hurricane. Filled with comedy, music, and characters, this curious tale of finger picking fury will blow you away!

Following the Sun is a tale about passionate gypsy love, treachery, and above all, the family connections that form from traveling together. Forever on the move, free and proud, gypsies follow the sun. The play is full of gypsy dances and the beautiful music of Eastern Europe. It is a show with breathtaking plot, vivid characters, and colourful costumes.

Grab a cup of joe, catch a few laughs, and experience cafe theatre, serving up to two plays with a live musical soundtrack featuring Shelly and Frank in Shadowpath’s Vancouver debut.

Shelly and Frank are the perfect couple, Frank thinks. After taking a quiz in Happy Lady Magazine, Shelly thinks she’s not a happy lady. Shelly has 37 magazine subscriptions.

Being Animal is a conversation with the natural world. A place you may walk by. You sit on cool grass. Lean on a tree. Watch water. See sky. Feel air. We ask, “Do you speak with them?” With song, dance, music, and puppetry, Being Animal seeks ways to “repatriate ourselves as citizens of the natural world… in order to survive as a species.”

Being Animal draws from philosopher, cultural ecologist, and performance artist, David Abram’s poetic perception in The Spell of the Sensuous and Becoming Animal, about how we have forgotten to truthfully “live” in our world and speak its language.

The 31st Vancouver Fringe Festival and its other 100+ shows will take place September 10-20, 2015 in and around Granville Island.

2 responses to “Musicals at the 2015 Vancouver Fringe Festival!”