I don’t think I need to do another positive review for this show as it’s got tons already, and I also don’t think I can point out anything negative it as I did not see anything wrong with it either.

But do believe the hype and the reviews!

The Book of Mormon did have us in stitches from the beginning to the end. It’s punch line after punch line interjected with songs that gives more punch lines, ensuring offense to any race, gender, sexual orientation in rapid fire frequency and, without a beat, it elicits the groans, the uncomfortable as well as the erupting laughter, making the show’s pace go by very fast, that before I knew it, we were on to the finale’s final joke.

The tour, called the Jumamosi Tour, is the 2nd National Touring Company headed by David Larsen as Elder Price, Cody Jamison Strand as Elder Cunningham (in the matinee I went to, Rob Colletti played this and he was perfect!) , and Denee Benton as Nabulungi. 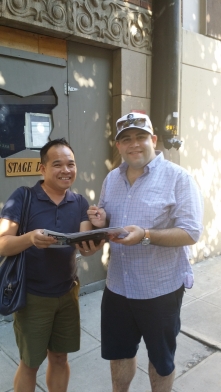 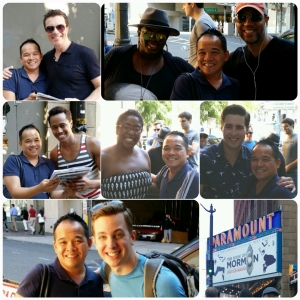 The BOM ensemble. This was a very friendly cast!

I got to meet a lot of the cast after the show in Seattle’s Paramount Theatre and they were so accommodating in signing programmes and giving photo-ops.

This is probably the only programme I have which was signed by the cast like hell!